Students leading the Let There Be Night (LTBN) program are also promoting Earth Hour in their community.  The LTBN team is approaching businesses, individuals, and governments to turn out lights on March 28, 2009, from 8:30 p.m. to 9:30 p.m., to raise awareness of energy issues and our consumption of natural resources.  Participants who will be joining the effort can print  the poster "We're flicking the switch...will you?" and display it in windows and stores to show their valuable contributing role.  Businesses such as restaurants are particularly encouraged to tap into the financial opportunity as people seek to dine by candlelight in the name of earthly stewardship.  In the"Gosh Dim It All" podcast, Jonathon Lutz, owner of the Uptown Kitchen restaurant, shares his positive experience from being active with Earth Hour 2008.
Posted by Let There Be Night at 12:19 PM No comments:

A letter to President-Elect Obama:
I write to encourage your participation in an event in March 2009 that dovetails with many of the issues President-Elect Obama champions: change, valuing science, community initiatives, energy reduction, taxpayer benefits, and lessening our impact on the natural environment.  Yes, there is still low fruit to pluck.
The United Nations declared 2009 the International Year of Astronomy, which commemorates the 400th anniversary of Galileo using a telescope to make fantastic discoveries.  Based on compelling new evidence--for example, Jupiter carrying four moons with it in orbit around the sun--Galileo could see he and his world were no longer the immutable center of everything.  It's a lesson we could all stand to learn.  Galileo essentially launched science when he showed that the old model no longer worked.  We need to change our way of thinking, he asserted.
During the last two weeks of March 2009, we invite then-President Obama to join us in looking up, not just figuratively but literally, as local students conduct a collective science experiment to quantify sky glow from wasted outdoor lighting.  In our community alone, thousands of kids in grades 3-8 will take a moment to count the stars of the constellation Orion that are visible from their backyards and to contribute their observations to an international database.  Then they will make a model out of LEGO  blocks to show visually how much of the night sky has already been lost.  The students will likely propose real, apolitical solutions that we believe the next Administration would embrace.  For more information see www.LetThereBeNight.com.
In preparing for this initiative, the students are investigating outdoor lighting technology that is available today.  At risk are energy and money, tax dollars, motorist safety, natural habitats, human health, and the heritage of the night sky.  As President-Elect Obama asks the nation to challenge the status quo, our community is working together to understand the needs of modern society and how we can lessen our impact on the earth.  While outdoor lighting may not be the sexiest topic in the national dialogue, it is the most visible aspect of energy consumption that we can change-both profound and achievable--for the old model no longer works.
Please join us.  The next 400 years begin now.
Posted by Let There Be Night at 11:55 PM No comments: 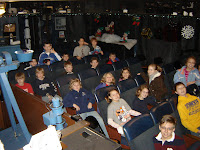 Four hundred years ago, Galileo observed the night sky through a telescope.  Based on new evidence he realized the old model no longer worked. People had to change their way of thinking about their place in the cosmos.
In December 2008, student teams from 14 PHM schools met at the PHM Planetarium to launch 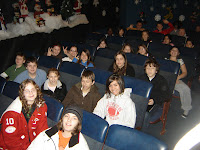 Let There Be Night, which asserts the old model of lighting up the night no longer works. We have to change our way of thinking about outdoor lighting.  The next 400 years begin now.
This blog is available to share ideas about the project and to communicate with each other.  We're underway.
The next meeting of the Student Leadership Team is Saturday, January 10, 2009, 9:00-10:30 a.m., in the PHM Planetarium.
Posted by Let There Be Night at 12:23 AM No comments: